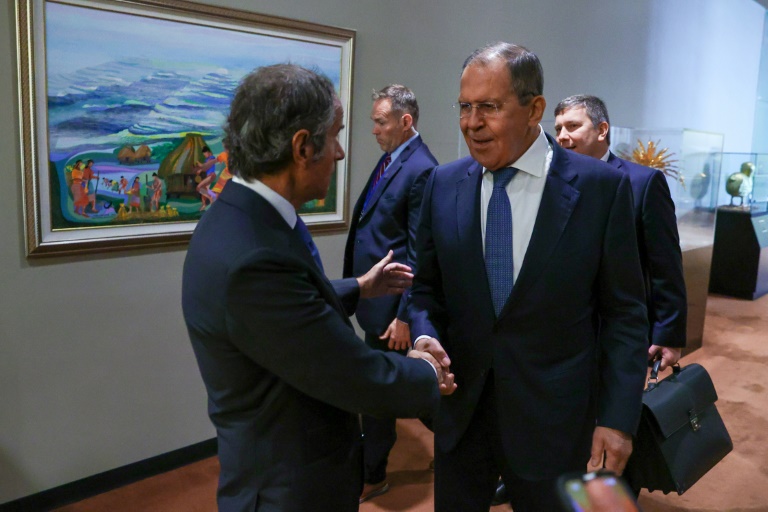 The International Atomic Energy Agency and Western powers expressed concern on Wednesday over the safety of Ukraine’s Zaporizhzhya atomic power plant as Kyiv accused Russia of a new bombing.

The Ukrainian nuclear energy company Energoatom said on Telegram that the strike by Russian “terrorists” destroyed one of the power lines at the facility, which led to a short launch of the emergency generators.

Rafael Grossi, director of the United Nations’ International Atomic Energy Agency, renewed his warning against “playing with fire” at the station.

“The situation continues to get worse and we cannot wait for something unfortunate to happen,” Grossi said at the United Nations headquarters in New York.

“I have proposed technical parameters to provide the necessary protection for this installation,” he told reporters after a meeting led by French President Emmanuel Macron.

But he acknowledged the lack of progress on his recommendation for a security zone around the plant.

“Disarmament is a goal, but at the moment it is about protecting the factory,” Grossi said.

Ukrainian President Volodymyr Zelensky, in a video address to the United Nations General Assembly on Wednesday, warned that Russian President Vladimir Putin had turned the Zaporizhia plant “into a target,” something he said should cause deep alarm around the world.

“Russian radiological blackmail is something that should concern every one of you, because none of you will find a vaccine against radiation sickness,” he said.

In a joint statement, senior diplomats from powers including the United States, France, Britain and Germany said they had “grave concerns” about Ukraine’s nuclear facilities.

They laid out seven “indispensable pillars” of nuclear safety including that safety and security systems “remain fully functional at all times”.

Energoatom called for “more decisive action” against Russia, saying that “the presence of IAEA inspectors does not stop them even.”

Russian forces seized Europe’s largest nuclear facility in March and the bombing around it prompted calls from Kyiv and its Western allies to demilitarize the areas around nuclear plants in Ukraine.

Early in the war, there was fighting around Chernobyl in the north, where an explosion in 1986 contaminated swathes of surrounding land.

Putin has warned of the “disastrous” consequences of fighting there, leading Ukraine to accuse Moscow of using Zaporozhye security as blackmail.

Russia was accused on Monday of bombing a third nuclear plant, Pevdnokrainsk, in the southern Mykolaiv region.